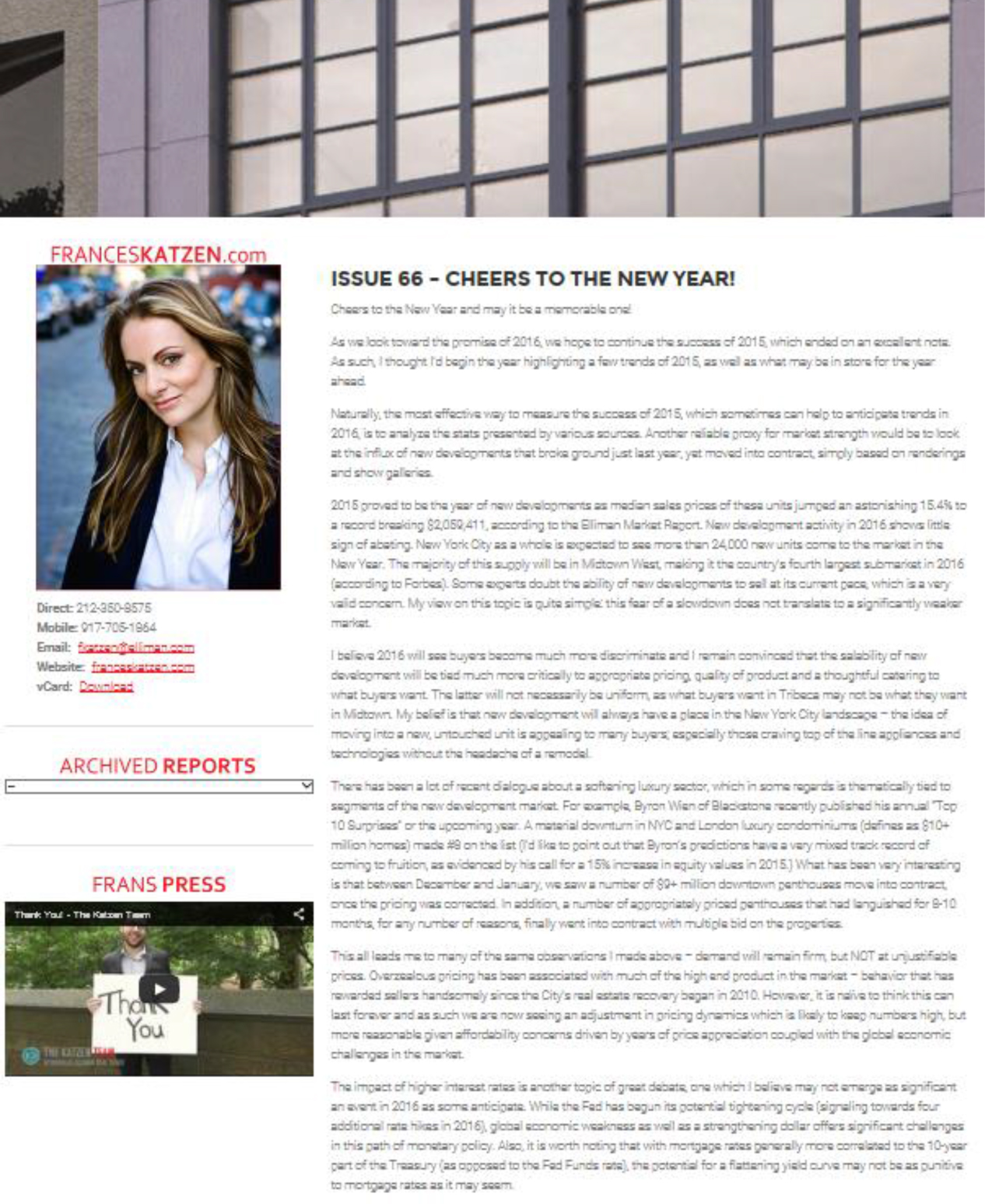 Cheers to the New Year and May it be a Memorable One!

As we look toward the promise of 2016, we hope to continue the success of 2015, which ended on an excellent note. As such, I thought I’d begin the year highlighting a few trends of 2015, as well as what may be in store for the year ahead.

Naturally, the most effective way to measure the success of 2015, which sometimes can help to anticipate trends in 2016, is to analyze the stats presented by various sources. Another reliable proxy for market strength would be to look at the influx of new developments that broke ground just last year, yet moved into contract, simply based on renderings and show galleries.

2015 proved to be the year of new developments as median sales prices of these units jumped an astonishing 15.4% to a record breaking $2,059,411, according to the Elliman Market Report. New development activity in 2016 shows little sign of abating. New York City as a whole is expected to see more than 24,000 new units come to the market in the New Year. The majority of this supply will be in Midtown West, making it the country’s fourth largest submarket in 2016 (according to Forbes). Some experts doubt the ability of new developments to sell at its current pace, which is a very valid concern. My view on this topic is quite simple: this fear of a slowdown does not translate to a significantly weaker market.

I believe 2016 will see buyers become much more discriminate and I remain convinced that the salability of new development will be tied much more critically to appropriate pricing, quality of product and a thoughtful catering to what buyers want. The latter will not necessarily be uniform, as what buyers want in Tribeca may not be what they want in Midtown. My belief is that new development will always have a place in the New York City landscape – the idea of moving into a new, untouched unit is appealing to many buyers; especially those craving top of the line appliances and technologies without the headache of a remodel.

There has been a lot of recent dialogue about a softening luxury sector, which in some regards is thematically tied to segments of the new development market. For example, Byron Wien of Blackstone recently published his annual “Top 10 Surprises” or the upcoming year. A material downturn in NYC and London luxury condominiums (defined as $10+ million homes) made #8 on the list (I’d like to point out that Byron’s predictions have a very mixed track record of coming to fruition, as evidenced by his call for a 15% increase in equity values in 2015.) What has been very interesting is that between December and January, we saw a number of $9+ million downtown penthouses move into contract, once the pricing was corrected. In addition, a number of appropriately priced penthouses that had languished for 8-10 months, for any number of reasons, finally went into contract with multiple bid on the properties.

This all leads me to many of the same observations I made above – demand will remain firm, but NOT at unjustifiable prices. Overzealous pricing has been associated with much of the high end product in the market – behavior that has rewarded sellers handsomely since the City’s real estate recovery began in 2010. However, it is naïve to think this can last forever and as such we are now seeing an adjustment in pricing dynamics which is likely to keep numbers high, but more reasonable given affordability concerns driven by years of price appreciation coupled with the global economic challenges in the market.

The impact of higher interest rates is another topic of great debate, one which I believe may not emerge as significant an event in 2016 as some anticipate. While the Fed has begun its potential tightening cycle (signaling towards four additional rate hikes in 2016), global economic weakness as well as a strengthening dollar offers significant challenges in this path of monetary policy. Also, it is worth noting that with mortgage rates generally more correlated to the 10-year part of the Treasury (as opposed to the Fed Funds rate), the potential for a flattening yield curve may not be as punitive to mortgage rates as it may seem.

Finally, the foreign buyer has been a topic of endless discussion. According to Real Analytics, foreign buyers spent a total of $87.4 billion on US properties in 2015; $23.5 billion of which was spent on Manhattan properties. Foreign buyer spending in 2016 remains a wildcard and in fact is part of Byron Wien’s thesis for potential challenges in the luxury market mentioned earlier. A stronger US dollar, weakening oil prices (and its impact on Middle East buyers) and a slowdown in the Chinese economy are just some of the challenges facing this buyer segment. However, there is a more bullish school of thought that suggests these dynamics will push another wave of foreign money into NYC real estate to avoid further destruction in asset values held in their home markets. In other words, recent events only serve as a reminder of exactly what’s driven some of the international money flows in the first place. Only time will tell how this interesting debate plays out…

As history has proven, a lot can happen in 12 months. However, if the successful wave of 2015 carries into the New Year, 2016 should be a prosperous year for us all!